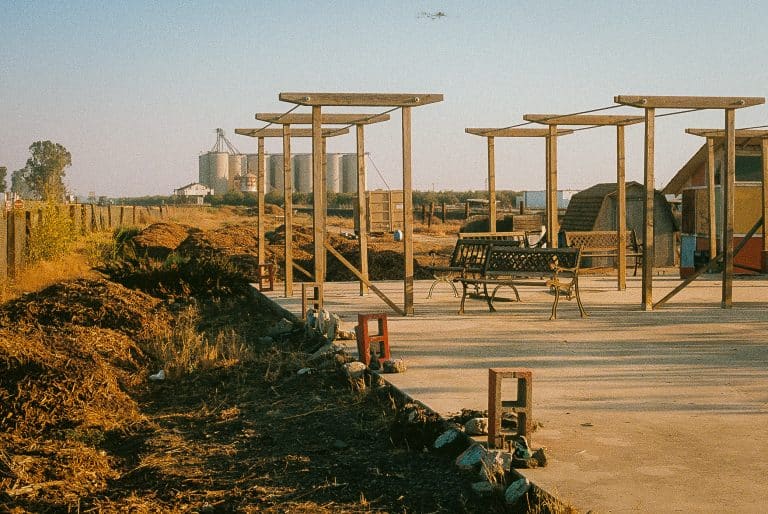 “Remember not to call me uncle,” says the liar’s uncle as they both step off the bus, onto the dusty road leading into the drive-in.

This was supposed to be the liar’s summer job but it’s October. She is sixteen. The liar’s uncle doesn’t want to work at the drive-in and it’s only his second shift. She, on the other hand, has reasons for staying.

“Doesn’t matter in town, but I’m Eddie at work,” the uncle says near the fence surrounding the parking lot. He looks behind once, a new habit. “I’m just a family friend. As soon as the job comes through, we’re all getting out of here like your apá wanted.” Her uncle’s voice carries a lead weight he picked up when he came home a few weeks ago. Being back is starting to gray his hair.

The drive-in is on the northeast side of town. The parking lot has a slight over-clean smell, like it’s hiding more than trash bins. The only other employee is filling the ice machine. Her name is Tanya Batz and she’s chewing ice from a cup. Someone lights a candle for Tanya every night, but she doesn’t know it. The liar does. The candle is in her room.

The niece is a liar because she protects a friend.

Hibiscus, their boss, is waiting for them behind the concession table, counting money. He rolls it in rubber bands like you do when it’s not going to the bank. He sips from a bottle of soda.

“That’s right,” the liar’s uncle says, smiling on his second day of work.

“You did well first shift, Eddie. I’m impressed you know all these movies. Carding customers and naming a horror flick for their birth year. I even enjoyed it. What am I again?” Hibiscus asks, motioning them over to a nook behind the popcorn machine.

“Count Dracula,” the uncle says. “1970.” He gives Hibiscus a top-to-bottom look as if confirming the choice of bloodsucker.

Hibiscus’s mouth reveals stained teeth. “No one wants to come in right now so I’m glad you’re here.” He wipes his chin with the back of his hand. “Lucy, I’m lucky you came back.”

The liar smiles and looks up at her name. “Of course.”

“I heard what happened. What do you think did it?” the liar’s uncle asks.

“I still don’t know. It took forever to clean the blood. Some of my regulars are creeped out, but I got a copy of the county sheriff’s report. Surprised they even showed up,” Hibiscus says.

“I have to tell you,” he continues, looking at her uncle, “I never imagined seeing blood flying across my lot. It even hit the popcorn machine.” Hibiscus looks at the machine, as if the blood spatter were still there. His fingers twitch as he puts the police report down. It’s only two pages but heavy with redactions, from what the liar can see.

“Lucy’s aunt says you’re a family friend. Where you from again?” Hibiscus asks.

“L.A.,” the liar’s uncle responds. He lies well, too. The liar is surrounded by mentors.

“I guessed as much.” The liar’s uncle glances at the parking lot, surveying cars as if deciding which can be trusted.

“I can’t assume what you know, or don’t, about this town,” Hibiscus says. “I want to make sure you stay longer than a few days. I have shifts to fill. Can’t be training someone new every week.”

More hours would be good, the liar thinks. More time to observe.

Hibiscus leans back, his face suggesting he’s found the backwash at the bottom of the bottle.

The liar’s uncle takes the report and studies it. The liar knows that he is signing on for more than just a job. She watches him pay particular attention to the redacted lines.

Hibiscus waits for him to get to the second page. “They interviewed everybody. Nobody knows what the hell happened. They were hoping Lucy saw something cuz she was behind the concession table. Tanya went home early. Isn’t that right, Lucy?”

The liar’s eyes flicker to her boss. Her anxiety over being found out almost trips her, but she manages to open her lips. “That’s right. She wanted to make sure she didn’t have ‘the sickness.’”

“Probably best you didn’t see…” Hibiscus stares across the lot. “Something hit the window of my office.”

“What was it?” the uncle asks.

“Something that left a lot of blood.” Hibiscus looks at the liar as if he knows about the secret in her head and is figuring out the best way to wring it out.

The report says a call arrived at the county sheriff’s last Saturday night. Customers were in their cars watching a horror flick when blood sprayed over the fence and onto their windshields, reaching as far as the concessions. They thought it was rain, at first, but then something jumped on top of the hood of one of the cars. It hopped, car to car, until it reached the catwalk on the screen. Then, it stood on two legs. Human. It leapt over the fence. That’s when a customer started screaming and turned on their car, igniting an exodus through the too-narrow driveway. Only a few cars got out before the crash. In the aftermath, the sheriffs found a yard-wide hole in the ground behind the screen. Blood everywhere. The liar’s name is redacted, but she knows her uncle knows it’s there. He knows the liar isn’t saying something. Doesn’t matter. They’re going to get out as soon as he saves enough money. The drive-in needs to stay open.

“It says someone was reported missing.” The uncle sets the report down as carefully as he chooses his words. “But I think people will forget in a couple of weeks. You should keep your schedule.”

“I am glad we’re in agreement.” Hibiscus grins. “You can see the tops of the cars from here. That’s all.”

The liar’s back is straight. The secret is still bubbling in her head.

“Were you the only one standing here, Lucy?” her uncle asks. The liar admires how astute her uncle can be and is about to answer when Hibiscus cuts in.

“No. I stepped out for a second. Can’t be everywhere, which is why I need you. You don’t have references, but Lucy’s aunt vouched for you.” Hibiscus extends his hand to Eddie. “Welcome aboard.”

The liar’s uncle puts out his hand and slips on his public face. It’s the face he uses when he doesn’t want anyone to know what he really thinks. “You can count on me, boss.”

“Well, looks like we’re done here.” Hibiscus takes the report and saves it in his back pocket. “Hopefully, it’s a quiet night. Right, Lucy?”

“I’m sure it will be,” the liar answers.

She is glad this moment is almost over.

There’s a pop at the gate where the cars come in through. It makes the men turn, but it’s just Tanya making sure the gates are fully open. Hibiscus picks up his not-bank-bag but looks, to the liar, like he’s still searching for something. He leaves for his office. The liar is sure he’s thinking about that night, wishing he had cameras pointed at the lot.

It’s after dusk and cars fill the lot with noise and spilled candy.

As the liar and her uncle pack popcorn and help customers, they notice Tanya has finished rolling out the speakers and is going upstairs to the film booth. The night is a cool one for October.

The liar looks up and meets eye-to-eye with Tanya as Tanya climbs the stairs. She’s wearing all black and disappears like a new moon.

The liar thinks she looks like a warrior goddess out of one of her aunt’s books on the Florentine codex.

She’s not just a pretty picture.

“Tanya was gone when it happened?” the liar’s uncle asks, when the line of customers is over.

“Sí tío,” the liar responds, bending the rule of not calling him uncle to distract him from the lie.

“Your aunt says neither sheriffs nor ICE like coming this way. Says they’re too scared, or uninterested, to come.”

“Most people are afraid of ‘the sickness,’” the liar answers. “But not everyone.”

It’s often dark when frightening or amazing things happen in this town. Last Saturday night, people were working in the crop fields a mile away. The movie made a perfect container of sound. No one could hear what was happening so far away. A worker ran down the road, calling for help, and the cars couldn’t hear him. So that’s when it happened. When she appeared.

It’s happening again right now, but only the liar catches a glimpse of her.

A shadow of a woman leaves the parking lot. The liar is running after her. There are too many people in the lot. Too many in the fields.

The liar finds Tanya outside the fence digging.

“Tanya,” the liar says. “Come with me. You’re gonna get hurt.” Or worse, you’re going to hurt someone else, and then somebody will turn you in. Her best friend’s brown hands are covered in red earth and her almond eyes are glistening as she pants like she’s running a fever. The liar doesn’t remember when she first noticed Tanya was sick, but this season has been the worst. The liar has stopped recognizing her during these violent fits. Last Saturday, the liar had to take a shovel to her head to drag her off the blood.

The film is loud, and people are enjoying the bootleg horror movie. The liar assumes she and Tanya are alone, but she is wrong.

“A chosen one!” a masculine voice says from behind the liar.

Hibiscus has dropped to his knees. Reverent. His pale face and hands shake like he’s watching the resurrection of White Jesus live.

The liar reluctantly accepts that Hibiscus might be able to help her keep Tanya safe.

The liar returns to the concessions. When her uncle asks, she pretends Tanya is still upstairs.

The liar is making popcorn.

Because everyone is here for the show.

Sarah Monroy Solís (Xicana and Mayan Kaqchikel descendant) grew up in the desert borderlands of Imperial Valley (Kumeyaay/Cocopah Territory). She feels deeply connected to the desert and her ancestral homelands in Sacatepequez, Guatemala, and Veracruz, Mexico. Sarah uses several artistic mediums, including writing, music, fiber arts, and (soon) large woodblock prints thanks to her acceptance into an art program by Big Ink. Sarah is a contributing creator/writer at Ofrenda Magazine (ofrendamagazine.com). When she's not working with fibers, she can be found writing about deserts, space, and time travel. Follow her writing on Instagram: @sarisolis, or for her fiber work: @thefogknitter.