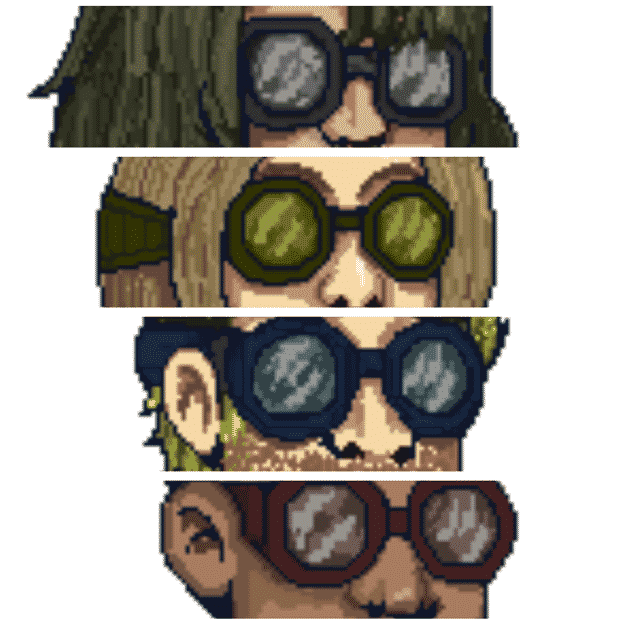 Fluppies give a rare, candid interview in One Hundred Albums from Benji Heywood (QunQ, Giant Waste of Man, Chainletter Collective). Click here to read the full issue and subscribe to OHA!

Meet the Fluppies: the Best New Punk Band from Nowhere

Recently my friend hipped me to something strange: a punk band with a debut album he couldn’t stop listening to. The only problem, he told me, was he wasn’t sure the band existed. How could that be? I wondered. I did some digging. I hit up my friend Lavin who knows about all things Central Valley punk and asked her if she’d heard of the Fluppies, who were rumored to be from some cow poke town off the 99 near Hanford or Delano or some shit.

Lavin, as always, came through. Turns out she went to grad school with one of the band members’ sister. She got me in touch with this sister, who then got me in touch with the boyfriend, who then got me in touch with one Sarah Quintero, lead screamer of the Fluppies. When I showed up to interview her outside Barstow at an abandoned cafe with some truly epic mid century architecture (a location she chose due to its midway proximity between her and I), I was surprised by her other three bandmates. They were here for the interview, they said. Quinn — as her friends call her — would be joining via satellite phone, something about her being stuck in jury duty.

So, are the Fluppies a real band? As always, the truth is somewhere in between. Below is our conversation, edited for clarity. The album does rip, though.

I see there’s a number of you answering, please introduce yourselves.

Press Chalmers: Press. Vox. Theremin, sort of. I don’t know if any of my parts make it onto the recordings. Lyrics when Sarah isn’t being a dictator.

Vyv: Hi I’m just Vyv. I do keyboards and the computer stuff. Just letting you know Sarah says I can be a little “awkward” so if you have questions for me please make sure she’s paying attention to my answers thanks.

First things first: Where the hell is Los Suelos? Your bio says you’re all from Los Suelos. I’m from California and I’ve never heard of it.

V: Right between the river and the Hole.

PC: Real ones know. You from Redding or something?

SQ: There’s not a lot to do. Most people work at the cow farm or just do whatever. There’s a few people who are into music like we are. Sometimes you get a Blue Dicks game, or a movie at the drive-in if that’s your thing…

ME: I didn’t grow up here, but it’s the quiet for me. There’s no internet, barely any cell service, hell we can’t even get radio. It used to drive me nuts, but you get used to it. Maybe it’s an age thing (I’m 36), but now I kinda like it.

PC: It wasn’t much. Met SQ and Vyv. Getting worse, though, I guess.

V: Press is exaggerating, his dad’s like stupid rich.

Speaking of dads, Sarah, your dad’s kind of like a Dave Van Ronk for Californian farmers. Is he who first inspired you to play music?

SQ: I don’t really like my dad’s music. It’s like, there’s A.A. Quinn the country/folk singer, and Angel Quintero, the dad who gave me guitar lessons and stuff. But I like to play loud. I’d say my biggest influence is The Authorities. Vyv showed me them years ago and I knew that’s how I wanted to play guitar forever.

How did you find music in a place as isolated as Los Suelos?

V: Oh I go into the hills for bars.

V: Yeah, where your phone works? I find all kinds of cool shit on the internet. Have you ever listened to The Locust?

SQ: We’re not total shut-ins… we’ve been to shows in Fresno.

PC: Friends in Stockton. Went to LA to do the album.

PC: San Pedro. 99 goes to everything.

I’ve heard rumors of strange things happening in Los Suelos: a cult, a local disease, gremlins (!)?… I can only imagine these elements have crept into the music. Make the connection for us between your music and these idiosyncrasies.

SQ: I mean, our music is all about Los Suelos. It’s important to be real, you know?

PC: None of the shit we sing about is real. It’s all like Hollow Earth old sci-fi textbook stuff.

SQ: It’s satire. Of course that stuff isn’t real, that’s why we dress up like Belowdowners (sic) and act like we believe it. To put it in a whole new context and deconstruct the belief system.

PC: I still think we fucked up starting off with a baseball song. Now everyone’s gonna think it’s a baseball album. Which is what we actually shoulda done. We’re Blue-Dicking the listener.

V: Blue-balling. I think what Sarah means is like we want to show how stupid the Church is. They try to be so secret and exclusive. Like I had to be so sneaky to get all those clips of Hibiscus [Bernard, a locally famous business owner whose voice features on several Fluppies tracks]. None of it’s real but those people totally believe it. It’s crazy.

ME: Shit is definitely crazy.

V: They’re not gremlins, they’re fluppies, and they are real. That’s why we named the band that.

As the Fluppies, you have already gained a ton of notoriety out of the gate, even inspiring a story by author Ian Kappos. Is that attributable to your live show?

PC: Never heard of him.

V: I feel like it’s just the internet really. There’s only a few kids from school who come to our shows. But once I finally got bars long enough to post our demo online people were so into it!

PC: I heard some kids started calling us skramz which really pisses me off.

Are you mixed up with Surface Dwellers? What do you know about that group?

SQ: They’re a bunch of writer dorks making up stories about our town and asking other writers to make up even more stories. I don’t think they’ve ever even been here.

What kind of personal challenges did the band face while making your blistering self-titled debut?

SQ: Well the hardest part was writing and getting everyone to practice. And then we had to get to Southern California somehow.

ME: Sometimes it sucks I have to drive everywhere. And the rest of the band being so much younger makes it hard for them to relate to some stuff, like heartbreak…

PC: Dude you gotta let that shit with Paloma go. I saw her the other day and she was hella stern. You don’t need that.

Most people don’t know the rich punk history of California’s Central Valley. For the uninitiated, where should they start?

V: So going back to the late ‘70s and early ‘80s there’s The Authorities, who had some crossover with Pavement who I guess are super well-known? Kind of before our time there was this psychedelic punk band called Vile…

ME: Oh yeah. I played with them once in Oakland. Those guys went hard.

PC: I like xMALCOLMx out of Stockton. They changed their name, though, I think.

SQ: Basically, it makes sense why Los Suelos gets ignored but there’s totally cool shit happening in Fresno, Stockton, and Modesto, and like if we can learn about it with no internet, what’s the rest of California’s excuse?

Lightning Round. I say a word or phrase and y’all give me a one sentence response.

PC: We had a Nintendo 64 at the practice spot for a while until the TV broke.

V: My brother had Final Fantasy 7 on his playstation, only I never got to play because he took the playstation with him to the Church before he—

ME: Half-elf ranger is my go-to.

The Bronx or Mariachi El Bronx

ME: Dude, some ska’s tight.

SQ: Pony’s bar is killer, when we can get them to let us in, anyway

V:  Maybe there are some cool ones out there, like we’re honestly pretty open-minded people, but fuck the Church of the Belowdown

PC: I said we should make patches that say “A.B.A.B.” like “all Belowdowners are bastards” but I got shot down.

V:  Yeah so like we try to donate money from our shows to good causes when we can, which would be awesome if we played more shows haha.

SQ: A few years ago my second-cousin was getting their pay withheld by some almond grower, I think they got help from a group like that

PC: That cave, what the fuck dude…

The Fluppies’ self-titled debut is out soon. Check out the first single “Older than the Hills” on their bandcamp page or watch the video.