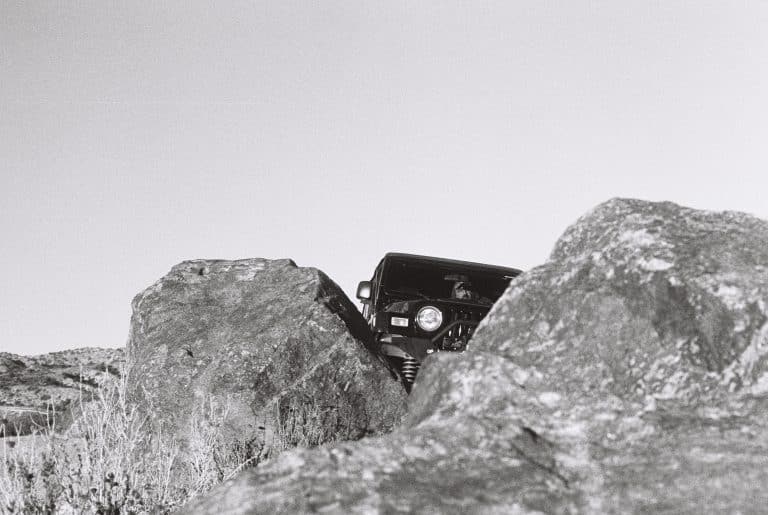 It was one hundred and fifteen degrees when I pulled into town. There wasn’t so much as a dandelion tuft in the sky to proffer shade. The heat was immutable and torturous, the kind of heat that bakes you like a brick in the hellfire of Satan’s kiln.

Weird fucking place, Los Suelos. Not much to it besides a slaughterhouse and a meager baseball stadium. The slaughterhouse made sense. Those tend to be in out of sight, out of mind locales. Nobody likes thinking about the violence that begets their beef. Why anybody would put a ballpark out here was beyond me though.

My office had received a torrent of phone calls about jackalope sightings in the area. Such things would usually be ignored by the California Department of Fish and Wildlife, but we were collaborating with a group of graduate students at UC Berkeley who were studying Shope papilloma virus, assisting their research by collecting infected specimens on their behalf when the opportunity arose. See, SPV is one possible origin of the jackalope myth. It infects various species of Leporidae, mainly cottontails, and causes antler-like tumors to grow out of their heads. Aside from the jackalope myth itself, there’s little to no evidence of jackrabbits showing symptoms for SPV, and the reports clearly indicated these were black-tailed jackrabbits, not desert cottontails, so this was all very exciting in terms of the research. To me, taking these calls seriously seemed like a mistake. I didn’t have much say in the matter. Despite my resistance, I’d been dispatched to nowheresville.

I was to rendezvous with Carla Cooper, a local who’d called claiming to have seen jackalopes on her property. She was in her yard watering a withered garden when I arrived. As I stepped down from my truck her eyes flashed to the sidearm on my hip. “Carla?” I asked.

“And you are?” she retorted flatly.

“Fish and Wildlife,” she interrupted, her face lighting up with relief. “Thanks for driving all the way here from Sacramento. I can’t tell you how much it means to me. Nobody’s been of any help at all. The sheriff damn near laughed his head off when I called him.”

“No problem, ma’am.” Carla was a portly woman with pale skin, gray hair and deep brown eyes like vats of molasses. “Well, let’s get to it,” I said. “Tell me about your experience with these, uh, jackalopes.”

“They started turning up maybe ten days ago. Whole bunch of them. They’ve practically overrun the town by now, burping all over the place.”

“Excuse me? What do you mean by that?”

“Didn’t you listen to my messages? They’ve been coming through at night and breathing some kind of putrid, reeking gas at us. Lots of folks keep their windows open at night to cool off and it comes right in through the screen.”

“I don’t mean to be rude, ma’am, but surely the smell you’re describing is coming from somewhere else. The slaughterhouse, maybe?”

“It isn’t the slaughterhouse. You’ll see. They do it every night. It’s not just the smell that gives it away. Their breath glows in the dark like a swarm of infernal fireflies. My husband inhaled it and it made him sick. He started acting strange and before long he sprouted antlers of his own.”

She was deadly serious. I wiped sweat from my brow, pissed that I’d trekked all the way out here for this cockamamie bullshit, but I couldn’t just abandon my assignment after one loony story. I still needed to at least try to trap a specimen for the study before I could go. I decided to indulge her.

“So your husband breathed in a mysterious gas and started behaving oddly. Why weren’t you affected as well?”

“Don’t know. It only seems to infect certain folks. Just got lucky, I guess.”

“This has happened to other people in town?”

I decided to leave that alone. “What was strange about your husband’s behavior?”

“Well, at first he just couldn’t stop scratching his head. Damn near itched himself bald until—” she placed her wrists on her head, splaying her fingers out— “little nubs poked up out of his head like crocuses in spring. Before long, he had full blown antlers, just like the jackalopes. Then he couldn’t stop rambling about the voices.”

“The voices?” I tried to hide my ebbing patience.

She nodded. “He heard voices telling him to go underground. He couldn’t shut them up. He said he needed to know what was calling him from beneath the earth. One night he just left. I woke up in the morning and he was gone.”

“What about the antlers? Did you try to get him to a doctor?” I really didn’t give a shit and this story was already beyond laughable, but I sensed that if I didn’t humor her then she wouldn’t tell me what I really needed to know.

“Of course I did! He wouldn’t listen. It was just as soon as those antlers came through that he started hearing the voices, like they were antennae picking up a radio signal. If the antlers went away, so would the voices and then he’d never be able to get to the bottom of things, or at least, that’s what he said.”

“When was the last time you saw him?”

“Oh, last night, after dark. He comes out every evening with the jackalopes. He won’t speak to me though, just looks at me with these wild eyes like he’s an animal or something.” Her voice began to break, tears welling up. “I don’t think he remembers who I am anymore. Please, will you help me?”

I couldn’t help but wonder if her husband even existed. Were these merely the ramblings of a hard boiled brain? “Could you show me where the jackalopes usually turn up? I just need to set some traps. If I see your husband I’ll try to talk some sense into him. What’s his name?”

“Joe. Alright. If I see him tonight, I’ll see if I can’t get him to come inside.”

Carla led me up a trail into what she called the Bolt Gun Hills. In thirsty glen we came upon a thicket of creosote which camouflaged a pit five feet in diameter. I parted the branches and peered down into the hole to see where it led, but to no avail. It seemed neverending, sinking into abyssal blackness.

“That’s where they come from. Every night, without failure. Joe too.” She choked back another spate of tears. “Please, August. Bring my husband back to me and kill those fucking jackalopes.”

“I’ll do my damnedest.” I walked her back to her trailer, sat her down and consoled her a bit more before heading back to my truck. It seemed reasonable to assume that anyone else I spoke to on this matter would be equally off their rocker, so I decided not to waste my time. All I wanted was to leave this godforsaken place. I went to get some gas and food. I set traps around the pit and waited for dusk.

I’ll admit, that xeric wasteland was rather beautiful at night. The waning moon shone like a great pearl in an ebon sea. Meteors streaked against the starscape. The sweet breath of a cool breeze on my neck laved away my frustration from the day’s absurdities and allowed me to refocus on the task at hand.

I could’ve let the traps do their work overnight. Instead I posted up in my truck, guzzled some coffee and stayed awake so that I could see with my own two eyes that nothing miraculous was taking place here in Los Suelos. I needed to prove it to Carla, or maybe to myself. Eventually, creatures started stirring in the twilight. Bats, coyotes, even a kit fox emerged, but no jackrabbits.

My eyelids had begun drooping when the thicket started to rustle. One by one, a drove of hares filed out of the brush. They bore honest-to-God antlers, not papillomas. Every last one of them evaded my traps with ease, seemingly unaware of the pheromones and food that lied within. Many scampered off deeper into town, but a dozen of them formed a circle in a small clearing and stood up on their hind legs with their heads pointed skyward. As they opened their mouths, a verdant, glimmering mist poured out and coalesced to form a wheel above them. While it swirled overhead, a larger shadow rose up from the pit. The silhouette of a man loomed in the darkness and as the moonlight illuminated him I saw he was naked, caked in mud from the bank of some subterranean stream and sporting massive antlers of his own. He ambled into the circle of jackalopes, raised his hands up to the twirling wheel and began to grunt and groan.

I was stupefied. This couldn’t be happening and yet it was. Joe Cooper was standing in front of me leading a congregation of jackalopes like a demented druid. I got out of my truck. “Joe!” I hollered. Nothing. I called again. Still nothing. Racking my brain for some way, any way, to get his attention, I picked up a rock and chucked it at him. The stone caromed off his head, prompting him to slowly swivel in my direction. As I met his gaze I felt the wildness that Carla had described. He looked right through me, like he could see my very soul and wanted to shove it down his gullet.

He started to speak.

“Succumb to the will of the earth. Leave behind the profligacy and defilement of this surface world and be baptized in the cleansing clay of restoration. Below. You must go below.”

He left the circle of jackalopes and began walking toward me, lumbering at first, then in an all-out sprint, his hands outstretched, his phallus erect, his mouth frothing. Before I could think I pulled out my pistol and fired three shots, one into his forehead and two into his chest. He took a few more steps before falling dead in the dirt. His antlers disintegrated into dust and blew away.

I couldn’t believe what I’d done. I looked over to the jackalopes, suddenly transfixed by the whirling cloud above them. I stepped into the middle of the circle and let the vapor envelope me. Its aroma shifted from sulfurous to saccharine as I breathed it in and in that moment I was overcome by a primeval felicity. Antlers erupted from my skull, blood flowed down my face, but I felt no pain. I could hear whispers beckoning me, echoing up from the pit beneath the creosote.

Maxwell Pretzer is a writer and musician living in Los Angeles who spends his days drinking wine and pounding drumskins.