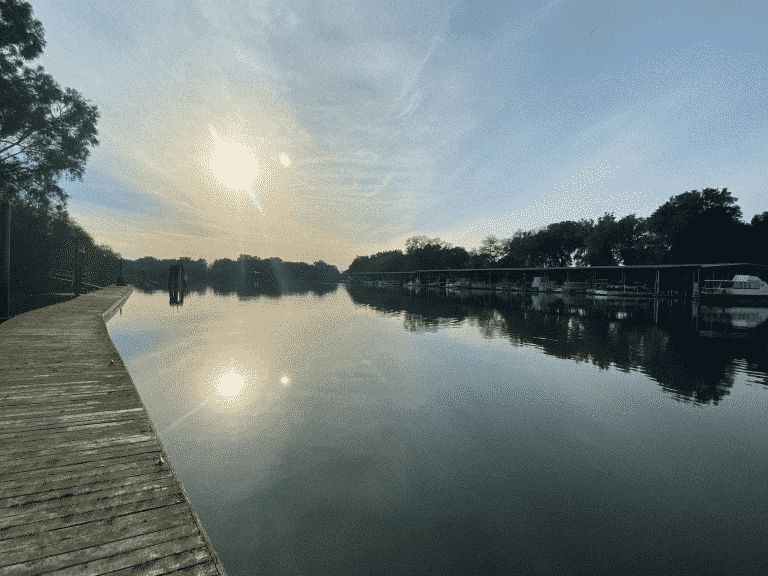 The mannequins at Esmerelda’s are grateful to have an artist in their midst. They’ve been alone too long in the abandoned boutique, shedding sequins, listening to the scratching of mice who grow bolder daily.

I felt some tension in them when I first tried the store’s door and found it open. I couldn’t blame them. The space—deep and narrow, with that all-glass front and back, like a cave but somehow sunny—is perfect and how could they know, just by looking at me, if I deserve it?

After I finished the first mural, they started to trust me. It’s this hulking tree hovering protectively over the limes scattered below it, the last rays of the sunset kissing the bottom layer of leaves. And okay, I did steal the tree. From my mother, from Sudan, from her photographs of Sudan. But I never think of taking from my mom as stealing. It’s like this: she’s… lighter than me. Lighter-skinned, lighter-hearted, lighter-footed. We’ve only been here for a year, but she already has so many friends whose houses she goes to for dinner, who come to pick her up and drive her to Schaefer’s for work. Moms are supposed to pass something down to their daughters. It’s genetics.

Jessie, who stands by the right window in a green and yellow striped dress that explains why Esmerelda’s is out of business, has a way of making her eyeless gaze look like understanding. I move her sometimes, to stand next to me while I paint.

“Anyway, it’s for a good cause,” I say as I sweep the floor. “I’m making Sudan.” I get that that’s kind of a white man thing to say, like I can capture a whole culture with a handful of paints. But it’s got to be in me somewhere. Growing up in Sudan was about five reinventions ago for my mom, but she’s still got her sticky accent and if she didn’t teach me to speak Arabic, she did at least insist I eat with my hands.

And it’s not like I took all my mom’s photos. I don’t even like her people pictures. She’s an excellent photographer most of the time, in a kind of careless way, like she’ll lift her camera and capture a blue sky swelling like love out of a circle of storm clouds. Or a stone, just as it lands on a lake, spraying water with irrepressible joy. But her pictures of people in Sudan—men in turbans and women wrapped in long cloths—I can’t stand to look at them; I hate the way my brain drinks them in as exotic. And I really hate comparing their sunburst smiles to that awkward baring of teeth I always inflict on my photos.

On the floor of Esmerelda’s, I’m going to reimagine my mother’s photo of the joining of the two Niles. I like to play with color, but you’ve got to be thoughtful about it, so I work things out with color pencils in my sketchbook.

“I talked in school today,” I tell Jessie one afternoon. She smiles encouragingly. It’s hard to describe her smile—she doesn’t really have lips—but once you get to know her, you can see it. “I was just thinking so hard about the floor mural that I wasn’t even paying attention to my mouth and it just opened and I asked Elena if she minded if I sat with her. And she likes to draw during lunch too—she makes comics—so she said no.

“Well,” I say, as I mix my paints, “she didn’t say no, she just shook her head, but she did say she liked my drawing.”

I know it’s cheesy, but I feel like I’ve been waiting for Esmerelda’s. The other day before school, I checked in the mirror, and I swear I could see some of my mom’s light in my eyes.

When I was nine years old, we moved into this great house with a buttery yellow exterior and out-of-date furniture we inherited from the previous owners. I’d planned to grow up in that house. My dad was still alive then, and I’d heard him tell my mom on the first night we moved in, “This is the last time, Aida, I mean it. You can’t get bored again.” My dad, he was—he was honestly so much fun. Like, I’d be spinning around the living room, rattling off everything I’d imagined when I was supposed to be paying attention at school that day, and he’d type fast enough to keep up with me, turning my rambling into scenes and dialogue. And I really thought that was going to be it; I was going to spin and tell stories with my dad in the butter house forever. Then, right after the car accident, my mom packed everything up all over again, and this buyer came to pick up the couch and it was just—I wouldn’t get off the couch; I couldn’t let them make a liar out of my dad.

When I see the corpse of Esmerelda’s, it’s like all at once I’m in that room again, the scratchy polka-dotted upholstery scraping away at my cheek, my mom scolding in the background, the buyer stammering uncomfortably.

The murderers are standing around, unashamed. There’s rubble everywhere, big chunks of Esmerelda’s spread out obscenely. Bulldozer. Orange vests. The beeping like a pebble rattling around my skull.

I want to shout, “What are you doing?” and “How dare you?” I want to let out a wordless screech loud enough to make them cover their ears.

But my voice doesn’t work. It never does.

I don’t go to school for two days. No one notices.

There’s nothing left but dirt the color of my skin. It’s deceptively soft, like it hasn’t swallowed up everything that matters to me.

I know I should stop coming here. It makes me cry every time. But my feet are programmed, and after school, they don’t listen to me, just take us out here.

I thought maybe I’d find Jessie. But the murderers have cleaned up their crime scene professionally.

The ground where Esmerelda’s once stood is starting to open up. It’s grateful to me like the mannequins once were. That is as it should be. After all, I haven’t forgotten. I keep coming.

In the new gap, like a gift, there’s a small pool of water.

The pool’s been the same size for a week. I was so sure it would keep growing. I’ve kept coming. I’ve stayed loyal. But maybe I’m misunderstanding. Maybe it needs something more?

I try to drown in my mom’s Sudan photos. The only ones left are the ones I hate, the people pictures. Those people… they look at my mom with so much love, but she’d let them go so easily.

Why can’t I let anything go?

There’s one portrait I keep coming back to: this older lady dressed in a white cloth that’s wrapped around her entire body, her bottom lip tattooed blue, her cheeks marked with long tribal scars. She is standing on a bridge, smiling with one of the Niles rushing behind her. It’s not a good photo, objectively; she moved just as my mother snapped, but the water reaches out to me like a friend…

It’s a mark of how weird Los Suelos is that no one asks why I’ve started wearing blue lipstick on my lower lip. The kids at school with their empty bovine eyes… curiosity has never occurred to them.

Anyway, it works. The pool is growing again.

The scars are a bit harder to pull off. I’ve still got my paints and my mom has some makeup but it takes a lot of practice to make them have depth. I don’t dare go back and check the growth until I’ve mastered the markings.

The new Nile is long enough that when I lie down beside it, it goes past my feet and my upstretched arms. I was wrong to think of the dirt as deceptively soft. I’d let my anger blind me to the ground’s friendliness. And salty? No, it is sweet, the velvety sweetness of caramel.

But perhaps I’m being too hard on myself, perhaps it had been cruel before, and as the Nile began to manifest, it’s become more welcoming, recognizing home in the echo of Sudan in my blood.

There are red and purple highlights in the river, just as I’d painted it. I let one hand hang in the water. The Nile will break it down, the brown of my skin dissolving into river clay adding necessary blackness, some chiaroscuro. I drag my face closer—mud like satin brushing my cheek—so that my tears fall into the river, adding to its growth.

Zeena Mubarak is a Sudanese-American writer. She currently lives in Germany where she is working on an MA in English Literatures and Cultures.