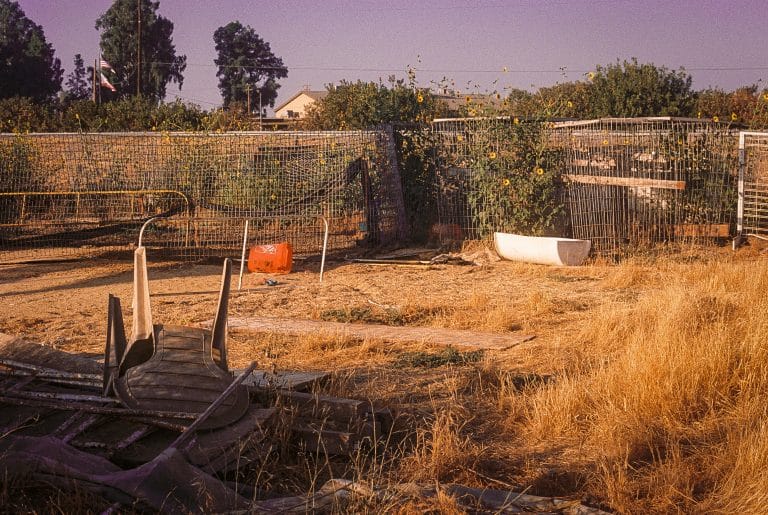 I got yelled at frequently for lying on the ground when I had a perfectly sturdy bed to sleep on, custom-made with good wood from the deepest, oldest, strongest forests of California. But this was a lie. I found out that the bed was made in Taiwan the first time I slept underneath it and read exactly those words burnt across one of its slats. My parents had told me the bed used to belong to my grandfather before he started sleeping on the floor too. And then, supposedly, it belonged to my brother, before he started doing the same thing. But I didn’t know if I could believe any of it because I don’t have a brother. I’ve never had a brother.

My parents are liars. I come from a family of liars. My grandfather was a liar who moved our family to Los Suelos many years ago, promising hope and good dirt to grow great produce. My parents are hopeless but lie to feel hopeful. I’m a liar because my parents need me to pretend I’m alright and love eating meat and hate things like punk and gardening and getting my hands and feet dirty. The only person who isn’t a liar is my sister. My sister has always been honest with me.

I don’t think liars are bad people. Sometimes we lie to make others happy. Sometimes we lie to protect ourselves. I just think you should have a good reason to tell your lies, but my parents often don’t. The biggest lie they told was that I had a brother. They were wrong. It’s one thing to be mistaken. It’s another to have the evidence and deny it and insist on the lie anyway. She calls herself my sister. I have a sister who worked nights as a janitor at the school my parents wouldn’t let me attend so she could watch after me during the day. A punk-as-fuck sister who snuck me out of the house to attend Fluppies shows and made sure I had more to eat than just the gray meat our parents brought home, things like cereal and oatmeal and sometimes a candy bar.

She had the brilliant idea to start a garden. At first it was just to make the yard prettier. But then she tried to grow vegetables and fruits too because she thought we could use nutrition that didn’t come from vitamin supplements. Most produce that wasn’t natural to the area just refused to grow. One day she brought home a seed given to her by a townie. It grew into pretty, beige flowers. And those flowers turned into bright, red fruits. Like rubies. She ate one. It made her sick. Even turned one of her hands witch-green. She destroyed the plant. She never really got better, but from then on could grow any plant she wanted.

In and around the little greenhouse our grandfather had built she grew a modest garden of carrots, string beans, tomatoes, a few onions, and two heads of lettuce that I once dreamed were my head and hers, in the ground, dirt up to our ears, stargazing. Those plants came from seeds brought by farmers from better parts of the valley, or were plucked out of the produce they sold to us for three dollars a pop because of the effort to bring them out here, and because half the food seemed to rot upon crossing the San Joaquin River. Together with some bread and Schaefer Meats cold cuts they made a decent sandwich, though I preferred to just have the vegetables as a salad.

Sporadically she’d become restless and drink a gallon of water a day and insist I do the same. She’d talk about getting the fuck out of this place, and I’d get scared and ask if she was leaving me, and she’d say no, of course not, I’d never do that. She’d spend almost all her time in the greenhouse, day and night, just to avoid mother and father, who ignored the grandfather tree and greenhouse so thoroughly I almost thought they couldn’t see them. Which would mean they couldn’t see her. But when they were home and she was visible, she fought with them so loudly it made the days feel hotter, and when they would finally leave for work, the heat stayed indoors, leaving my sister and me to cook in it. On one such day, she disappeared.

The only time I ever felt I needed to lie to my sister was when eating carrots, by pretending to like them. I was distracted by the heat and the lie I wore on my face broke when I bit into a too-earthy carrot. I grimaced. She said I should be goddamn grateful for the food she provided and prepared for me.

After lunch my sister went back to the greenhouse and I spent the afternoon by myself playing the old NES, which was working for once albeit with the colors inverted. Her vacancy came like a vibration. A little earthquake. I looked at the antique chandelier over the dining table to see if it was swinging. It was still.

Outside, the afternoon was white-bright, the light bouncing off every metal surface—our aluminum fence that surrounded our bungalow home, the dead cars in our driveway, and the greenhouse door, slightly ajar.

Walking past the grandfather tree, I thought I’d caught it frowning. And so as I approached the greenhouse door I already knew I wouldn’t see her. Her sleeping bag, at the center of all our plants, was empty. But I wasn’t. I was full of water, and nasty carrots, and string beans, and maybe actual strings, tightly wound. I felt one in my chest strum itself, the sound reverberating throughout my body and all its water. She, the only honest person I knew, had lied and left me here.

I thought she’d have at least left a note to tell me where she was going or if she was coming back. I knelt onto her sleeping bag covered in dirt and found nothing except a small, sad, unpotted plant that I’d never seen before lying on its side.

I wanted to go to town to see if she was there, maybe picking up snacks for the road. But this plant was in need of help. There was a quality to it that made it appear pained yet resilient, positioned as if it had been crawling toward the greenhouse door.

I knelt down and took it into my arms, cradling it like a baby, and remembered how she’d talk to her plants because she’d heard somewhere that doing so made them happy. And when I’d talk to the plants, tell them jokes, sing them Fluppies songs, she’d laugh and open up a little more to me too, and talk to me about our grandfather who, according to our parents, left town one day and never came back. But that was another lie, she had said. Before I was born, he was the only person to call her by her real name, not by the one our parents gave her, and even if he couldn’t grow vegetables and fruits, he could help her grow and shade her from our parents’ constant, burning, ultraviolet scrutiny.

So I whispered to the plant, and its bulb opened up. But when I held it out in the sun for too long, it closed away. I dug a hole at the base of the grandfather tree under his shade and placed her there. Then I found a nearby spot where I could lie down and push my toes and fingers into the dirt, and we could all absorb as needed and become as needed.

J.J. Prado is a queer and Xicanx writer, editor, and artist from Southern California. Their work centers issues and celebrations of love, friendship, sexuality, and gender, and has appeared in Indicia, RipRap, Flexx, and Nerve Cowboy.