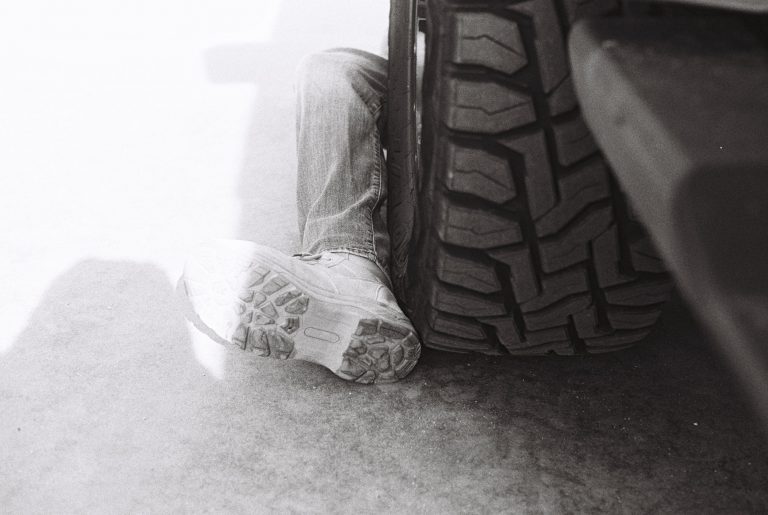 The lights from town twisted into stars through the glass. They danced with the distorted reflections of the half-built subdivision as Marc turned the vodka bottle in his hands. Soon, the spinning made him queasy and he rested the bottle against his cheek. The alcohol inside sloshed to the rhythm of his brain.

“I gotta get out of here,” he mumbled.

Marc stumbled across the road, pushing past Sarah and Vyv, who were perched on the edge of a storm drain.

Marc ignored her, fumbling for his phone and letting the bottle slip from his hand. White light lit his face as his phone switched on, and broken glass glinted from his shoelaces. With a grunt, he hauled himself up onto the metal frame of the nearest house.

“There he goes,” Press said.

“Somebody stop him.” Sarah yawned.

The steel was cold in Marc’s hands as he climbed the side of the house, bones groaning with the beams as they took his weight. The crisscross of the building’s frame looked like a web, sticky with concrete and cigarette butts. An abandoned reminder of what could have been if Los Suelos wasn’t such a shit hole. Chatter from his friends felt distant as he clambered onto the roof and took a seat between two beams. With a stretch he held his phone up to the sky, eyes on the corner of his screen.

Just one bar, just for a bit.

Press yelled something he didn’t hear. Sarah and Vyv laughed. Marc swayed on his perch when a bright light from the other side of the development caught his eye. Headlights of a truck, crawling across the road between the empty houses and the San Joaquin. Before it came to a stop, the passenger door opened and someone fell out, rolling across the ground. Dust blew into the air as the driver hit the brakes. On their knees, the passenger dragged themself in front of the truck, the headlights painting their shadow long across the ground. A door slammed and the driver stepped forward, leaning on the hood of the truck. From this distance, and with vision blurred, Marc could only make out silhouettes. Which was enough detail to see that the person on the ground was convulsing, as if they were having a fit. Their body twisted and then their back started to bend. Started to stretch. Grow. Marc rubbed his eyes as the person expanded, growing bigger and bigger until—

Red splattered across the front of the truck, turning the headlights a dull pink. The person on the ground slumped, dreadfully still. The driver crouched down beside them. Slack-jawed, Marc let his phone fall from his grip as he watched the driver reach into the enormous wound that was once this person’s back, and begin to dig.

Marc twisted around, almost slipping as he vomited off the roof, his friends cursing as spew hit road. Wiping his mouth, Marc turned to the sound of a door slamming shut. There was quiet, and then the person on the ground wobbled to their feet. Lines of gore stretched from their body to the dirt, like grilled cheese sticking to the pan. Leaning against the truck, they shuffled around the hood, and stepped back inside. The engine roared, the truck turned around. In a wink, as it drove off, Marc caught a flash of tall, white letters painted across its side.

The distortion wailing from Sarah’s guitar grated against Marc’s brain. With a grimace, he eyed the spew bucket next to his kit. His mind was a tumble dryer filled with bloody thoughts from the night before, and each time he hit the snare he felt as though he were punching himself in the head. It didn’t help that Paul Clove had just arrived.

During gigs, especially at Pony’s, Marc tried not to look at the crowd—they made him nervous. But his eyes latched onto Paul as soon as he wandered in. While Marc couldn’t be certain about what he’d seen last night, he was sure Paul was involved. The Clove triplets did almost everything together, including management of Los Suelos’ number one exotic pet shop.

Paul made a beeline for the bar, his arm around the shoulder of a man Marc didn’t recognize. The man was hunched over, his eyes pressed to the ground as Paul guided him to a barstool and ordered a round. As soon as they sat down, a woman sidled up and greeted Paul with a lipstick kiss on the cheek. They shot the shit until the end of “Grease Monkeys” when, after a glare from Press, Marc realized he had stopped playing. After sheepishly counting in the next track, Marc turned his focus back on Paul. The woman said something into his ear and handed him a photo, which he took with a smile before handing it to his companion. Even from the other side of the bar Marc could see how pale the other man’s face went. The woman pressed a wad of cash into Paul’s hand as the other man crumpled the photo into a ball and threw it under the bar. After the woman stepped away, Paul pulled his companion close and said something into his ear. The man was shaking. Paul stood him up and led him outside.

Marc jerked his head up, Sarah hissing at him, “Even we need to be in time, fuckhead.”

Following the set, Marc ran up to the bar. The photo was still there on the ground, soggy and stinking of beer. Shaking it out, Marc frowned.

It was a photo of a Tule elk. Eyes open and staring at him.

Marc wrapped his jacket tighter around his shoulders as a wind blew in from the San Joaquin. His eyes had adjusted to the darkness, and over the edge of the dry riverbank he could see the pointed roofs of the housing development. Behind him, the pockmarked scrubland that surrounded Los Suelos stretched out into the night. Vast and dry, it made him feel small.

It was close to midnight when Paul’s truck rumbled into view. Marc recognized the man from the bar when he stumbled out of the truck and fell to the ground. His back was already stretched, curving out behind him like a boil, ringed by a torn shirt. Under the headlights, the fleshy mass was angry and red. Paul stepped out of the truck with a yawn. The man tried to pick himself up, but the weight of his back pushed him into the dirt. He let out a low moan as the boil pulsed, thrashed, and then burst. Blood and pink viscera exploded outward, turning dust to mud.

Casually, Paul stepped out of the way while Marc felt something hot and wet hit his cheek. Reeling, he began to wipe at his face. Paul pulled a towel off his shoulder and stepped up to the mess of the man on the ground. As he knelt down, Marc heard an inexplicable mew, high-pitched and glassy. With hands shaking, Marc pulled out his broken phone. Hitting record, he stepped out from the bank.

“I got you, motherfucker.”

Paul turned, cradling the towel against his chest. Something was clearly moving inside. His face was still for a moment, before slipping into a smile.

“Bienvenido,” Paul said, the greeting mocking in his mouth. “Sorry for disturbing you, we’re just finishing up.”

Paul stood up and Marc froze, holding his phone up like a shield. The man on the ground twitched.

Paul was rocking the thing in his arms. He seemed undisturbed by the red dripping down his sleeve. Marc swallowed and Paul’s grin widened, teeth peeking from behind wet lips.

“Wanna take a look?” he asked.

Before Marc could say no, Paul unwrapped the top of the towel and leaned into the light.

Paul gave a frown at the elk calf in his arms, its hooves sticky with raw flesh. Marc stumbled backward, retching. Paul chuckled.

Paul bounced the elk in his arms and turned to the man motionless on the ground. He sighed.

“But I’m afraid his contract has run out.”

Marc spat out a glob of phlegm. His mind raced. He could taste the iron tang of blood in the air.

Paul swept his eyes over Marc.

“Say, you look like you could use a job.”

Paul stepped forward but Marc recoiled, slipping on the edge of the bank and falling into the cracked mud of the river. Paul’s shadow loomed over him, his face in darkness.

Terror pumped black ice into Marc’s veins, and he scrambled to his feet, running out into the hills. Cracked clay and dead weeds rushed underneath him as his lungs burned, mind screamed. The lights of Los Suelos faded in the distance behind him.

Zachary Benn is a fiction writer based on Kaurna land in Australia, with a special fondness for horror and sci-fi and exploring how these genres can reflect our ordinary lives. He has been writing for as long as he can remember and occasionally, when pushed, he will share that writing with others. Sometimes it’s good.